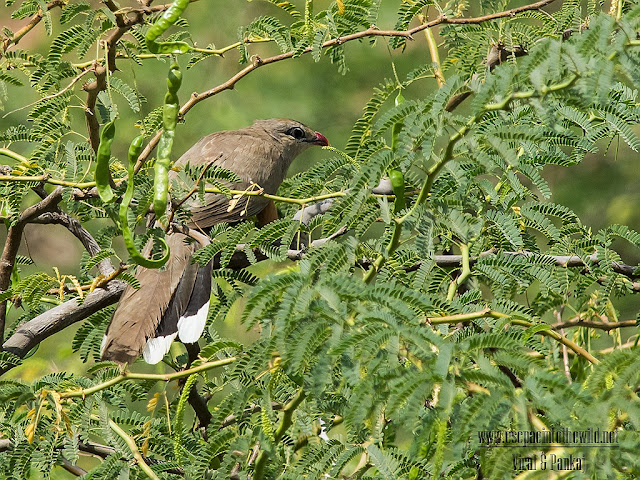 On that day, we were busy in observing water birds with our binox in a reservoir of dam site within Balaram-Ambaji Wildlife Sanctuary. Suddenly a bird with glossy red bill crosses the road, literally by walking-not flying exactly in front of us.  We both speak in unison… “Oh it is Sirkeer Malkoha!” It disappears swiftly through vegetation running like mongoose. We were little bit depressed because no one’s camera ready at that moment. We missed one more chance to photograph beauty of ‘Lipstick bird’.  We tried to find it for some time then decided to move ahead. While returning we stopped by at same place to look out just in case…! We got luckier this time. We were able to spot well-concealed Sirkeer Malkoha on one of the Prosopis juliflora (ગાંડો બાવળ) shrub only because it was calling…! It has very attractive hooked bill with bright cherry-red and yellow color. It is a large bird around 40 cm. mainly brown and rufous in colour and having long heavy white tipped tail feathers. It was hopping from branch to branch with great agility, like the coucal. We saw this bird many times but first time we got somewhat clear shots.
The sirkeer malkoha or sirkeer cuckoo (Phaenicophaeus leschenaultii), is a member of the cuckoo order of birds, the Cuculiformes. It is a resident bird in the Indian subcontinent. The scientific name of this bird honors the French botanist and ornithologist Jean Baptiste Leschenault de la Tour.
Their habitat is largely terrestrial, open scrub and thorn jungle, deciduous secondary jungle. Normally seen singly or in pairs. Sexes are similar, but juveniles are duller and barred above.
Usually stalks amongst thickets like crow-pheasant, searching for food; insects, lizards, fallen fruits and berries, etc. They prefer to runs swiftly through undergrowth rather than fly. They are feeble flier, but climb trees rapidly. Their call is normally a subdued "bzuk... bzuk" ; also an alarm call of "p'tang" with a metallic quality.
11th April 2016
Balarm - Ambaji Wildlife Sanctuary, Banaskatha, Gujarat, India

By Walk with Nature April 08, 2017
It’s our nine-year daughter’s wish to see a tiger in its natural habitat. From last couple of years, we visited Gir WLS in her term end March vacation. Now she wants change… we already saw Lion why don’t we go to see a tiger instead…? She demanded just like that And this is how we ended up to our Ranthambhore adventure….! We drove to Udaipur from Patan on 20 th March’17. We just enjoyed beauty of Lake City of Rajasthan. On next morning 5.30 am, we started our journey Udaipur to Sawai Madhopur. A road of Udaipur to Kota is very smooth six-lane state highway. However, road of Kota to Sawai Madhopur is in very poor condition, boring and tiresome throughout patchy and bumpy. We reached Sawai Madhopur at some time past 12 pm. We booked our room at “Tiger Home” get fresh in hurry, had a quick lunch and rushed to catch the noon safari. Ranthambhore allows safaris in Gypsies and Canters. We are planning to spend three days in Ranthambhore, planning three safaris in all. Ranthambhore has
1 comment
Read more