By Walk with Nature April 08, 2017
It’s our nine-year daughter’s wish to see a tiger in its natural habitat. From last couple of years, we visited Gir WLS in her term end March vacation. Now she wants change… we already saw Lion why don’t we go to see a tiger instead…? She demanded just like that And this is how we ended up to our Ranthambhore adventure….!
We drove to Udaipur from Patan on 20th March’17. We just enjoyed beauty of Lake City of Rajasthan. On next morning 5.30 am, we started our journey Udaipur to Sawai Madhopur. A road of Udaipur to Kota is very smooth six-lane state highway. However, road of Kota to Sawai Madhopur is in very poor condition, boring and tiresome throughout patchy and bumpy. We reached Sawai Madhopur at some time past 12 pm. We booked our room at “Tiger Home” get fresh in hurry, had a quick lunch and rushed to catch the noon safari.
Ranthambhore allows safaris in Gypsies and Canters. We are planning to spend three days in Ranthambhore, planning three safaris in all. Ranthambhore has ten numbered tourist zones. Zones 1 to 5 are premium ones, with zone 2 & 3 being the clear favourite at this time. It is evidently not easy to get the popular zones booked.  Our trip was unplanned so we did not get any safaris in premium zones. But, we heard that T-8 in zone 6 has three cubs so we booked our safari in same. That was the afternoon Gypsy safari of day 1, in zone 6.
Day:1 21st  March’17
Again road to zone 6 is very rough all dusty and bumpy, passing through crowded and congested bazaars of old Sawai Madhopur. Open sewers beside roads make things even worse. Yet to be fair, we did sight some impressive landscapes with old architecture.
We checked in at entrance of zone 6 – “Forest Chowki  Rajbag” area known as “Kundal” at 2:30 pm.
Zone 6 is vast rolling grasslands surrounded by high rocky hills, explored by herds of Nilgai (Asia’s largest antelope), Sambar and spotted deer. The landscape along the road is spectacular. It has several stunningly beautiful spots, especially large patches of bright golden grass with hilly background. A tiger sitting on this grass in evening golden light will make for a dream photograph…! March-April is the time when Palash, or 'flame of the forest' blooms. From distance, orange flowers give you a mischievous look of forest fire.  And mind you, it was a real hot day without any forest fire.

As often happens, we started our safari with plenty of alarm calls but no sightings of any tiger. An interesting feature of tiger tracking in Ranthambhore is that when alarm calls are heard, whether chital or langur, our guide and driver listened to see if multiple individuals were calling. Calls by single individuals clearly lack credibility, believed as mating calls. We also learned from our Gir WLS experience that while calls of chital may sometimes mislead, but Sambar’s alarm call, if heard, is a certain indicator of the tiger’s presence.
Our guide spotted some water puddles in Zone 6. According to him water-holes are most favourite places for tigers to spend a hot day. We waited and waited... but the tiger did not show. We clicked some birds and Sambar drinking water before move ahead.


We saw a big white colour domestic cow corpse killed by a tiger at early morning but it’s unopened. It's look like tiger was not that hungry, still didn’t come back to enjoy its prey! Yet it will surely come sooner or later …!  So it was a hot spot of zone 6 that day. At least 10 Gypsies waited by that kill but all returned empty handed… no sighting of tiger in zone 6 that evening. Practically we had spent the evening chasing alarm calls and waiting by the kill in vain at zone 6. We had no luck on first safari. Our guide and driver worried and hurried to get out. We checked out from entrance at 5.50 pm.
Day:2 22nd   March’17
For next day morning safari, our hotel owner Mr. Hemraj advised us to visit same zone due to that cow kill. They believe tiger will eventually come to eat prey and morning safari is the best for sighting. We agreed to their field experience and once again visited zone 6.
We were one safari down without spotted the famous Bengal tiger. The anticipation had been steadily building from the moment we entered the gate at 6:15 am. There are three or four Gypsies full of foreign tourists already drove past us. We passed the previous day cow kill without any progress…! Still no show…!
But we did better than previous day, with our guide’s sighting of a tiger resting under shadows of trees somewhat 50 meters away. We can only able to spot it with the help of binocular, strangely camouflaged with woods. We enjoyed the view for several minutes. Gypsies were starting to gather at the spot. The tiger stirred suddenly and started to walk towards our gypsies. There is lots of shouting and chitchat in different languages.  People got really excited...! Anyways our guide recognizes it as tigress “Ladli T-8”. At one moment the tigress reach to the road stopped for several seconds.
We didn’t able to see her crossed the road because of lots of tourists ahead of us. They are mostly foreigners, already heightened than us and with standing on seats of Gypsies totally blocked our view. All our snaps having foreign tourist’s heads more or less…! Tigress passed the road came into view from behind dried bushes. Only then, we saw another kill also a domestic cow, smaller than yesterday, ashen gray in colour. She just picked cow between her legs and drag it with help of her strong jaws. Tigress looking at us in a somewhat hostile manner like beware…here I rule…!  It’s a scary scene, which reminds us that we are dealing with a wildcat and we should be afraid…! She takes her prey with her, goes back the way she came, disappears in Jungle.
Later on, guide told us that this tigress having three cubs to feed in which one is a weakling. Probably she is carrying food for them. Clearly, it is a difficult task.
We moved ahead in forest and saw Spotted Deer, Chinkara and Sambar.


Today our driver takes a different route than previous day. This area of jungle is comparatively more wooded. We also register numerous present of birds like Indian Peafowl, Plum-Headed Parakeet, Woodpeckers, Grey Francolin, Spotted Owlet, Petronia, Rufous Treepie etc…
Most remarkable among these are the Rufous Treepies. They are most common all over the forest. The birds lost their fear for humans, as they hopped on the gypsies, freely perch on heads and hands inspecting us closely for signs of anything eatable. We actually did see some birds at the rest points eat the biscuit directly from our hand. They have sharp talons, so you might be left with a few scratches.

Rufous Treepie feeding
An important rule of RTR is tourists can’t step down from their vehicles either Gypsy or Canter. We can only step down at particular rest points. We just reached such rest point. At that moment, a passing Canter reported seeing a tiger at gate on the kill.  Our driver jumped like crazy and began a frenzied drive at mad speed towards the spot indicated. We are holding on tight to keep us from bouncing right off the gypsy. We spent most of the time in the air like a roller coaster ride. The gate is quite a distance away, near the entrance. We finished this distance in the matter of minutes; it was unforgettable, terrifying and incredible fun ride though…
Finally, we reached to a cluster of at least 12 gypsies with the tiger barely visible only ten meters away.
What we did sight is a magnificent male tiger ‘Kumbha T-34’. It was apparently ignored noisy tourists, busy in eating its prey- the same prey, where we waited whole evening previous day. We didn’t able to click tiger yet. We waited on safe side against an open patch. Our driver and guide predicted after eating tiger will only come this way up to the hills to drink water. So we are ready to click at any moment. On other hand, people were behaving so irresponsible way. All started shouting, accusing, and complaining. Every driver wants to move its vehicle on proper position, every guide want to please its guest, every tourist wants good look of the tiger. In this chaos, one foreigner steps down from the gypsy and his guide got panicked. Another group of foreigners trying to take a selfie with tiger with help of selfi stick…! This is the bitter reality of RTR.
This banter went on for about fifteen minutes. Tiger carelessly ate after which he was like disgusted enough to rise and really picked his way up to the hills. Finally, we get our chance to click this huge, marvelous and of course dangerous cat. Kumbha is having beautiful patterns behind its neck and intimidating careless behavior. Tiger passes the patch gracefully in seconds dozens of cameras clicked, he only looks once to the crowd and started uphill never look back.
The group then started up to chase him, but by the time traffic jam sorted out tiger reached top of the hill. Vehicles chased him while they can.  Meanwhile, the cat disappeared without a trace. We still remember his like ‘who cares’ posture.

Bengal Tigers of Ranthambore National Park - Zone -6
Our daughter is more than happy. We are lucky to see tiger and tigress in a same safari at our very first visit of RTR. Maybe we didn’t get royal snaps of tiger. What we experience is more than we expect. We spend our rest of the time in local birding, scene sighting, and croc sighting…! If you think tigers are the only large predators of Ranthambhore, think again! But that is my friends an another story…..! 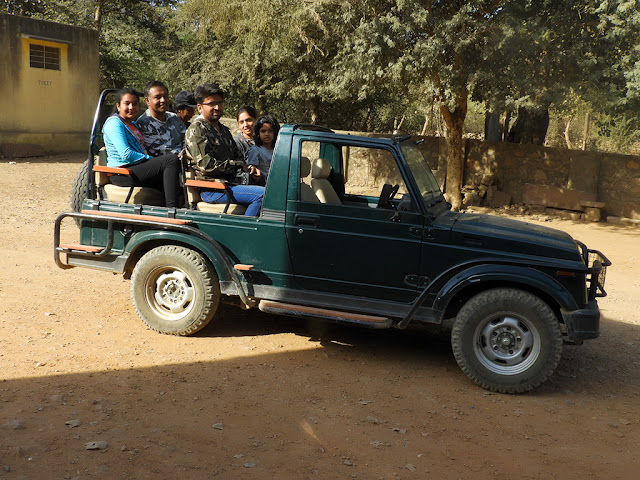 Note: we are curious about local people’s reaction about tigers killing cow. A local authority says most of the cow roaming into the forest has no owner…! They are easy target for tigers, killed frequently. Govt. of Rajasthan gives compensation for killed cattle if legal procedure was done. In short it is no big issue here.