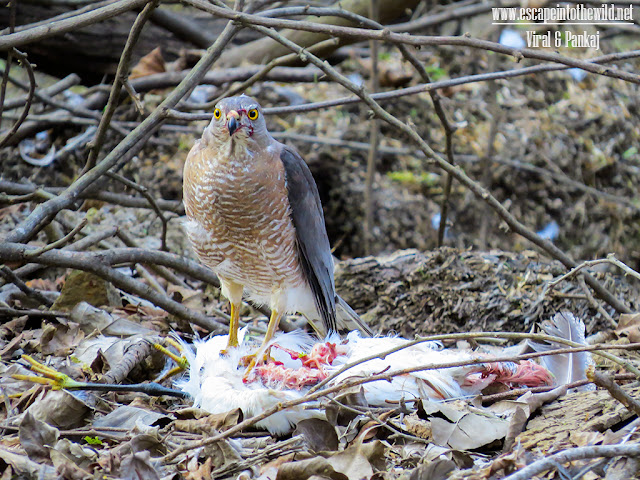 It was 28th January and its birthday of my husband. We went to Chadva Rakhal on previous day and we saw Indian Paradise Flycatcher first time in Kutch. It was our initial days of bird photography. We were very much excited about seeing the IPFC in Kutch. Therefore, we decided visit again. Pankaj and Sweetu were busy in search of IPFC. I randomly went on another trail, which had dense vegetation, looks pretty isolated and almost vacant- sumsan.  I was about to turn when I saw a small raptor with kill beside a narrow water stream. Prey was still alive panting frantically as it’s trapped under firm grip of the watchful raptor’s talons when I saw. I immediately went to call Pankaj to photograph it. He informed me that small raptor is Shikra and its kill is Little Egret, which is rare prey for Shikra. Shikra already started to feast on prey by that time we can clearly see fresh blood of prey on Shikra’s beak. It was amazing to see a small raptor can kill that large prey. After that, many times we encounter Shikra with kill but never like this one. Really, Shikra is a badass killer in raptors.

They were noted for their pluck and ability to take much larger birds including partrigdes, crows and even young peafowl. The word shikra or shikara means hunter in the Hindi language (the male was called chipak or chipka based on call.  The word Shikra is borrowed from the Urdu word which is derived from the word shikari meaning hunter. Hunting in Persian and Turkish is referred to as shikar, and in Arabic the hunt master in the Mamlook Era was known as Ameer Shikar. The word Shikari may also be used in English in the sense of "hunter".

By Walk with Nature April 08, 2017
It’s our nine-year daughter’s wish to see a tiger in its natural habitat. From last couple of years, we visited Gir WLS in her term end March vacation. Now she wants change… we already saw Lion why don’t we go to see a tiger instead…? She demanded just like that And this is how we ended up to our Ranthambhore adventure….! We drove to Udaipur from Patan on 20 th March’17. We just enjoyed beauty of Lake City of Rajasthan. On next morning 5.30 am, we started our journey Udaipur to Sawai Madhopur. A road of Udaipur to Kota is very smooth six-lane state highway. However, road of Kota to Sawai Madhopur is in very poor condition, boring and tiresome throughout patchy and bumpy. We reached Sawai Madhopur at some time past 12 pm. We booked our room at “Tiger Home” get fresh in hurry, had a quick lunch and rushed to catch the noon safari. Ranthambhore allows safaris in Gypsies and Canters. We are planning to spend three days in Ranthambhore, planning three safaris in all. Ranthambhore has
1 comment
Read more