By Pankaj Maheria November 11, 2016
It was a cool morning of 23rd March 2016. We were on our apartment terrace for photograph beautiful full moon, which was still visible on early morning. While coming back we register noisy movements of Purple Sunbird pair in our backyard. We were pleasantly surprised to locate their small nest on small baboon tree. From our living room window, we can observe their behaviour without getting them disturbs (photography with a long lens, with no flash, at least 12 meters from the nest). There was plenty to see and observe from the house itself, and we made the most of it……  Although Purple Sunbird is strictly a common backyard bird but still a chance to observe its nesting behaviour is a wonderful experience for us. Here we like to share some observation.
Nest already built up when we register their presence. The nest is an oval structure. It is built of a collection of various materials like hair, fine grass, twigs, dead leaves, chips of bark and fragments of decayed wood, seed cases, scraps of rag or paper and especially lots of caterpillar droppings all nearly plastered together with cobwebs and silky fibers. The whole structure is suspended from a twig by a short rope of these materials with generous use of spiderweb, and a pendant irregular tassel of the same hangs from the bottom of the nest. The interior of the nest is look like neatly and softly lined with seed-down. This is a completed nest with nesting chamber and oval entrance hole on one side, height of nest is hardly 4-5 feet from ground. 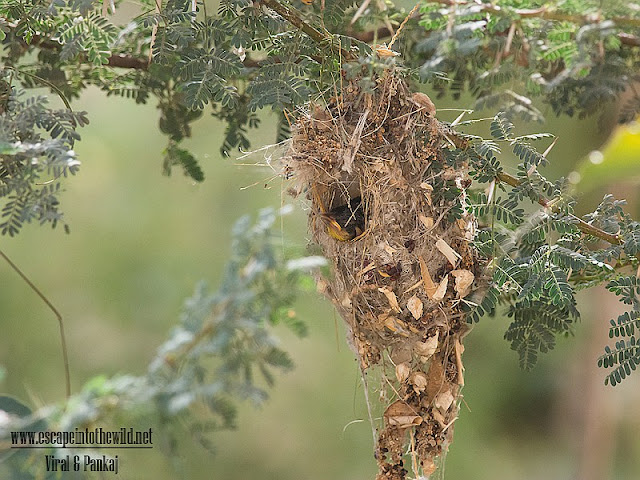 Image 1: nest
Hatching: Its look like Incubation has begun. Surprisingly we only saw the female emerge from the nest. Maybe our observations were brief to see if the male also was involved in incubation but mostly it’s seen nearby guarding the nest. On one occasion, it aggressively chased another Purple Sunbird away from the nest.
On early morning of 28th of March, we first saw the male sunbird with prey in its bill and we guess that finally hatchlings came out. 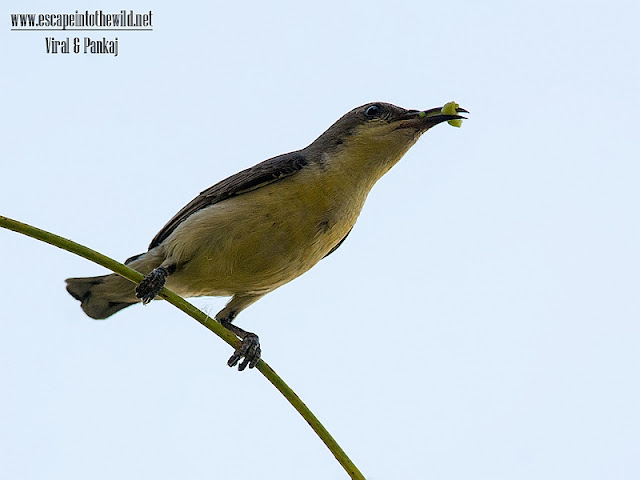 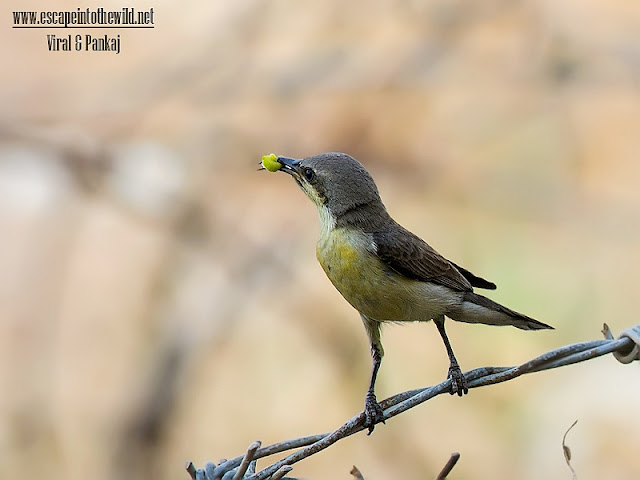 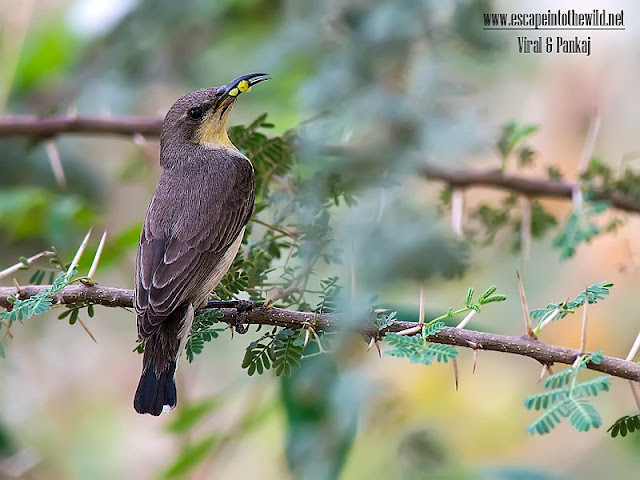 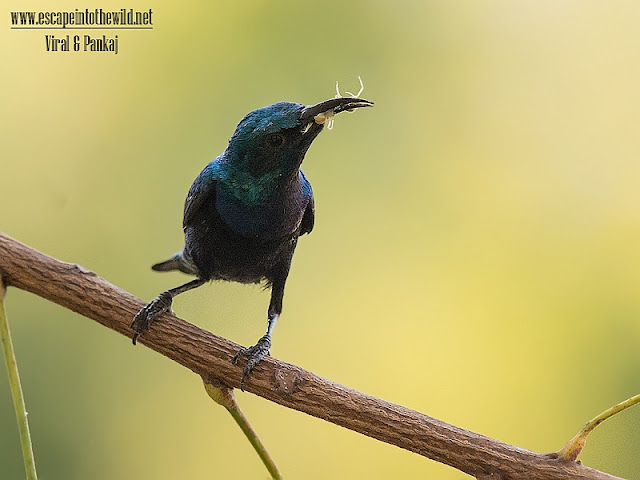 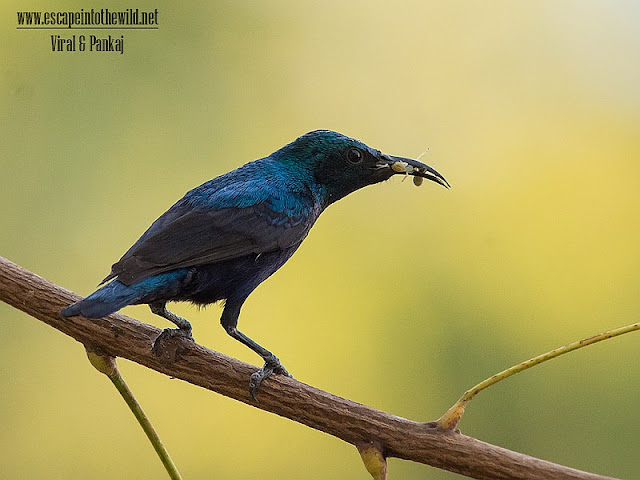 Image: male-female with prey
We can able to see three chicks in nest hole. Parents started to feed hatchlings from early sunrise at 6.50 am.  Male and female sunbirds-both parents feed the chicks frequently, almost every 10-15 minutes turn by turn. They usually collect spiders from outside of our window ceiling and small caterpillars- insects from nearby plants to feed chicks. They feed chicks with visible prey and sometimes with regurgitated food. 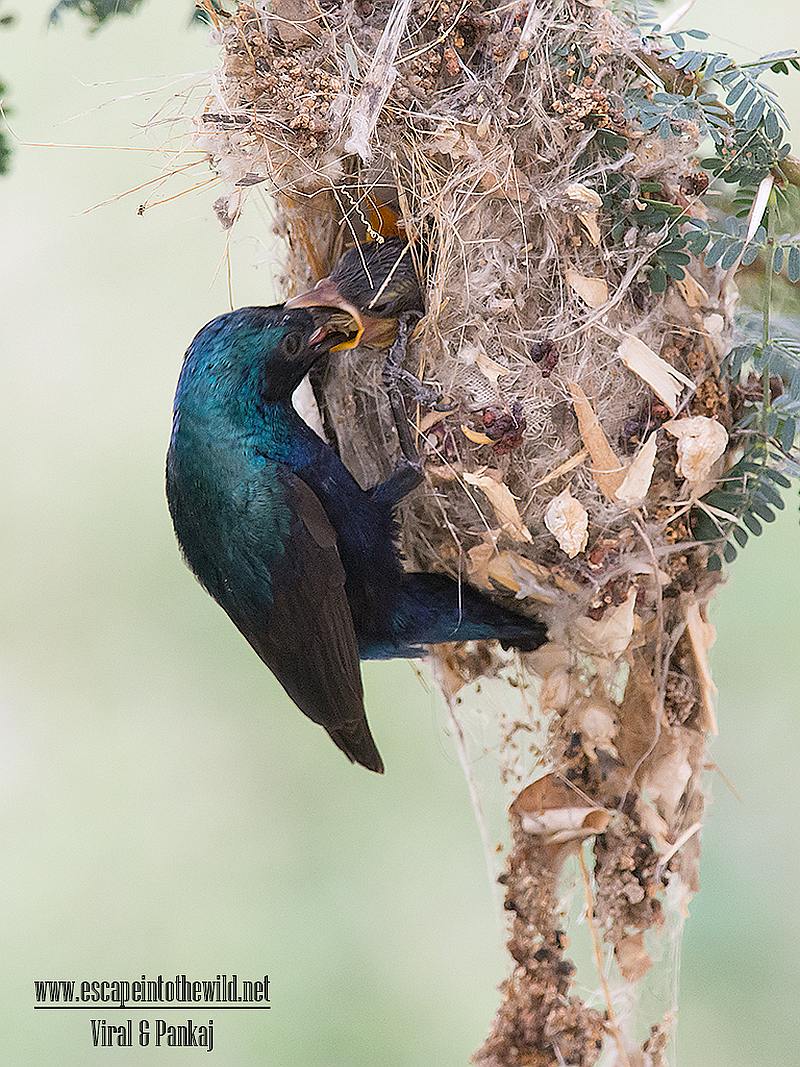 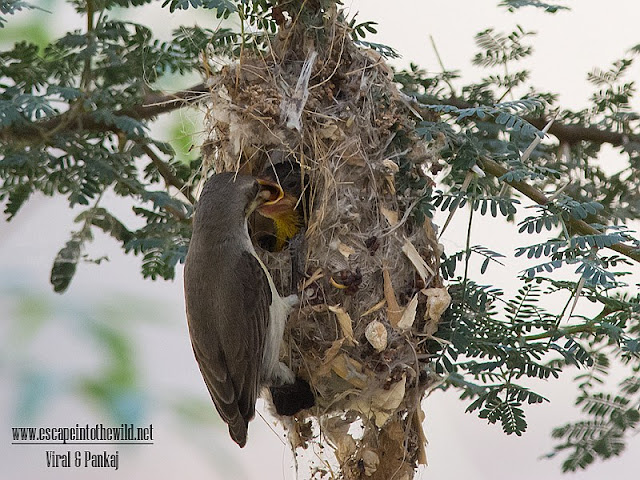 male-female feeding
Sunbirds best active in morning and evening time. Feeding activity is comparatively become slower at noon. Female appears to be resting near nest at noon. Once a White-eared Bulbul foraging curiously near to the Purple Sunbird nest resulted in female left without feeding the chicks and return after sometime with same catch. So sunbirds are careful about not to reveal nesting site. They also regularly collect fecal sack from cheeks, almost thrice in an hour and drop it 30 m or more away from nest. The nestling usually produces a fecal sac within seconds of being fed; if not, waiting parents encourage chicks to expel fecal sack by nudge around vent and literally pull out fecal sack. Fecal sack is generally white in colour with a dark end. Removal of fecal material helps to improve nest sanitation. It also helps to reduce the chance that predators will see it or smell it and thereby find the nest. 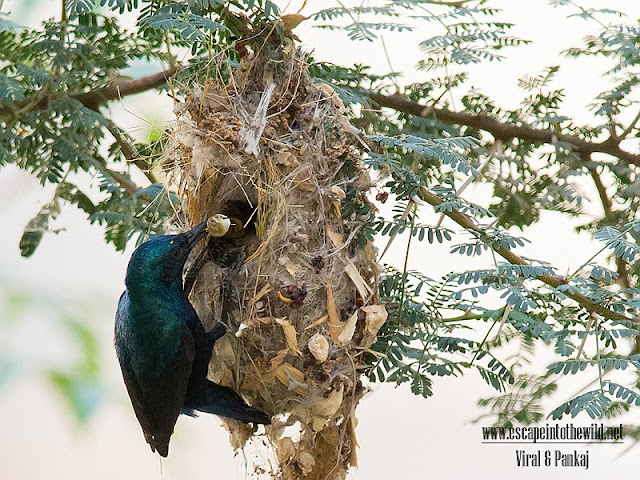 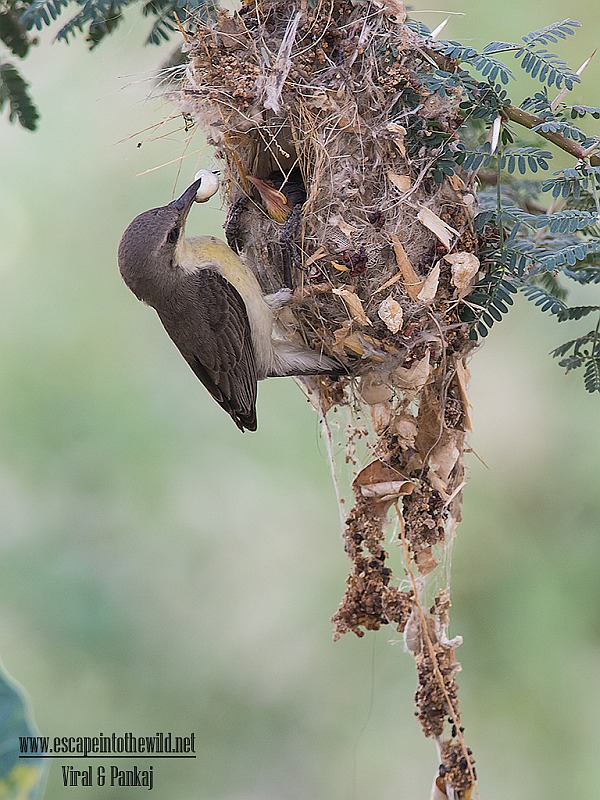 male-female carry fecal sack
On the morning of 4th April 2016 parents stopped to feed nestlings in to the nest. They perched on nearest branches insisted chicks to come out with urgent continuous calls and signaling fluttering of wings. Nestlings appear to be impatient, their movement increases into the nest and they are peeping curiously to the outside world from the nest hole but did not come out instantly.
After few hours of exercise, they succeeded to lure out first chick. It has beautiful lemon yellow underpants and olive-green upperparts with slightly-curved bill. 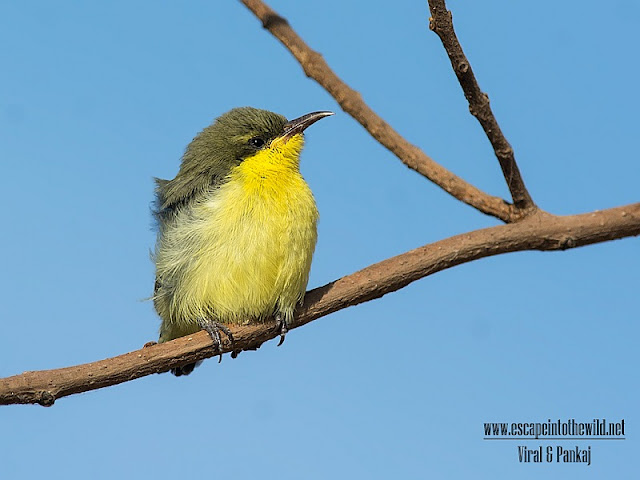 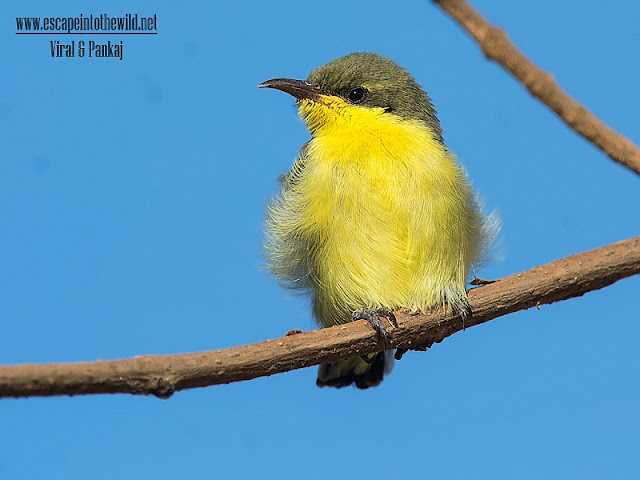 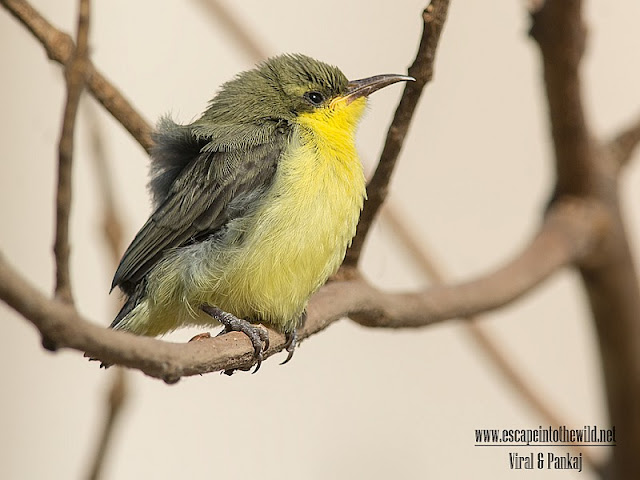 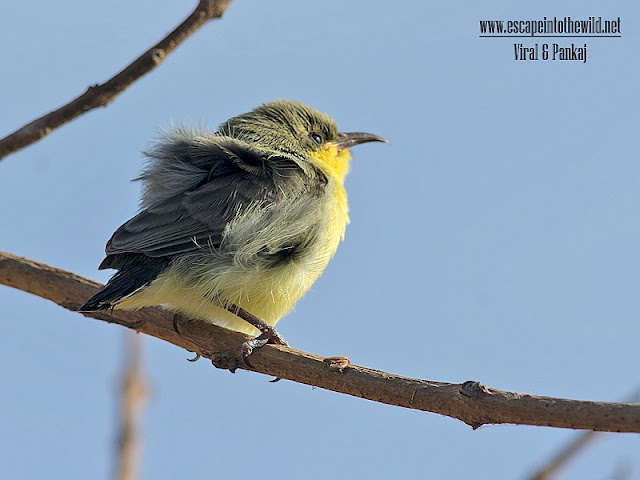 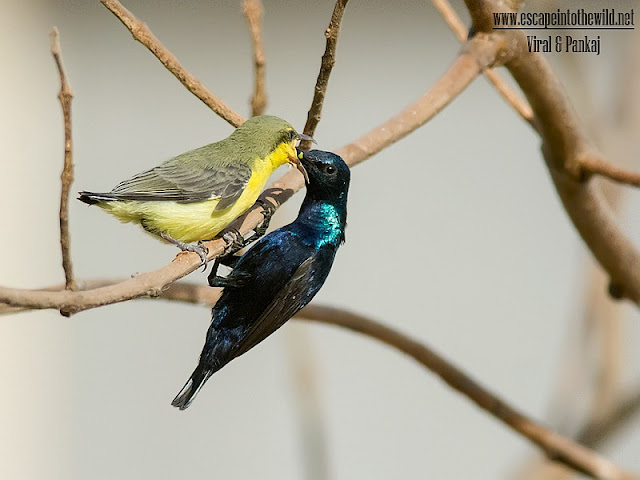 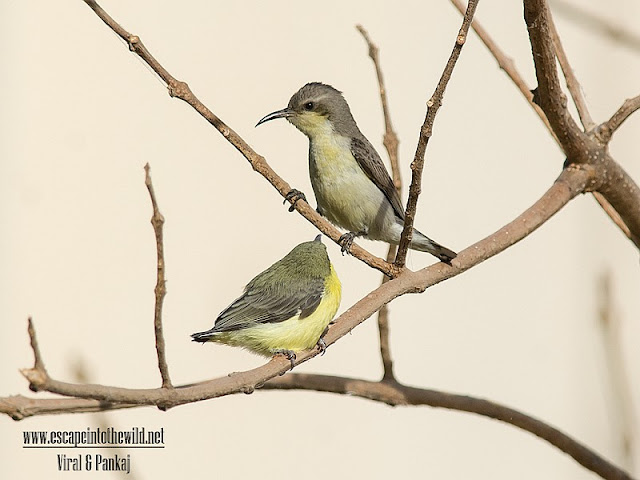 It’s perched on same branch for few minutes. Soon parents feed the fledgling and started to give flying lessons. They demonstrate short distance slow flights between two nearby trees. Parents insisted chick to take flight by signaling it with fluttering wings and even nudged it to give start-up. Finally fledgling took its first flight successfully to nearby Neem tree and then again and again its take trembling short flights behind parents. Parents feed this fledgling as well as nestlings several times. This brand new fledgling also started foraging and continuously calls for its parents, which resulted in, reveal its position on Aankado plant. In our campus, Aankado- Calotropis gigantea (Crown flower) is one of the most visited shrubs by Purple sunbirds. By the evening second chick also came out. Parents stick around and were super busy in feeding and flight lessons. Next few days we observe same behaviour. Chicks were grown up so fast. Nest totally vacated by now and we did not know the fate of third chick. After this, we become so familiar with call of immature sunbirds and able to locate many other sunbird chicks in campus area. We register presence of at least eight pairs of sunbirds with their chicks around different flower bushes at same time in our campus.
On 12 April 2016 a new pair of sunbirds or the very same pair started to visit old nest. The purple sunbird pair usually rear at least two broods in succession, sometimes from the same nest (1). 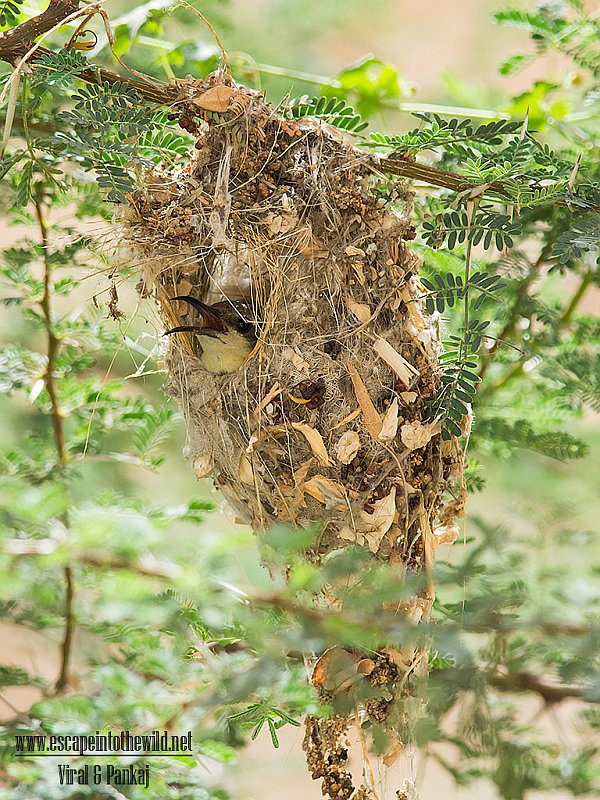 On 16th April 2016 female set inside the nest probably started incubation as usual male sunbird perched nearby. 28 April 2016 8:00 am parents started to feed two nestlings. After that we lost count of days but mostly it’s happened after 3-4 days. We just returned to home after pickup our daughter from school-suddenly we heard loud alarming calls of Purple Sunbirds. Out of curiosity we rushed to balcony. We saw two frighten sunbirds trying to shove something away from their nest. We can’t see anything and guessed for cat or snake. But its thorny Baboon tree and how a reptile can manage to reach the nest so we consider it out of question. And then we saw an Indian Monitor jumped to the ground from Baboon tree before disappear in weed. Sunbirds appear to be calm down as perched on nearest branches. Sadly, we can clearly see a small hole in to the nest plus absence of nestlings. We checked for any movement at nesting site following day but nest was totally evacuated. Then after nest become out of any use.