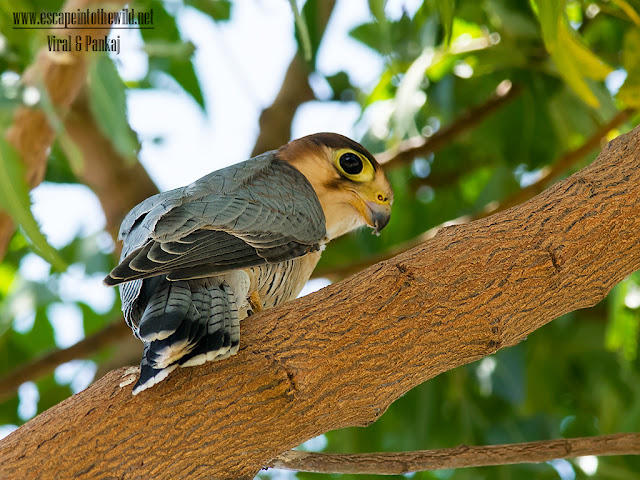 We went to Nal Sarovar Bird Sanctuary for breeding plumage, on 14/04/16 story posted at Black-tailed Godwit. In afternoon after taking lunch, we were planning to return to the lake. We had news of Red-necked Falcon seen near other part of the lake. Now we have confusion about visit or not visit that place, it was quite far away + horribly bumpy road. Finally, we decided go there, after all it is Red-necked Falcon…! We saw three Juvenile birds looks like they were recently left their nest. We searched surroundings for the adult but probably they were not nearby. Chick of Red-necked Falcon look super cute…!

The red-necked falcon (Falco chicquera) is a bird of prey in the falcon family with two disjunct populations, one in India and the other in Africa. This medium-sized falcon has bluish grey wings and upper body, a chestnut red cap with short chin straps passing through the eye. The primary feathers of the wing are black and a single black band at the tip of the tail are distinctive. The Indian subspecies Falco chicquera chicquera also known as the red-headed merlin or red-headed falcon is found mainly in the open plains of the India Subcontinent although it is thought to have occurred further west in southeastern Iran.