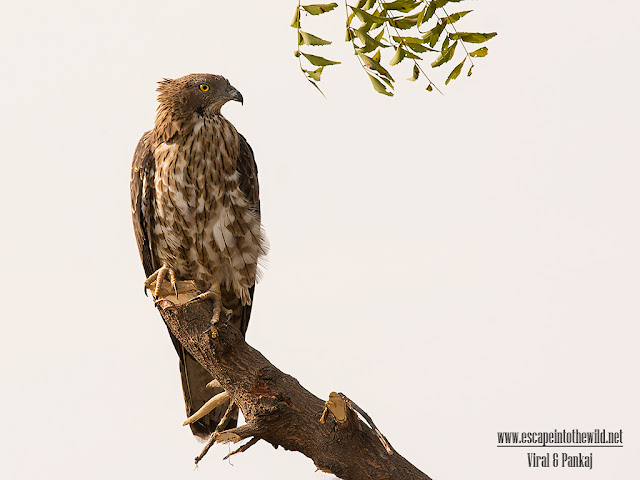 While going towards the Balaram Ambaji Wildlife Sanctuary we always take short cut for the Sidhapur. It was single lane road and pass through three villages. We see many birds in this area whenever we get chance to go there for birding. We were passing by a stable of buffalo situated just beside the road. After passing out we thought that we saw one raptor perched on tree. We decided to turn back and have a quick look. Is Oriental Honey Buzzard perched on open branch? It has small crest so we are confused about its id. Till that date we did not see the Changeable- hawk Eagle so we thought that its might be Changeable- hawk Eagle. But after closer examination we just know that it is dark morph of Oriental Honey Buzzard. It's also known as Crested Honey Buzzard.

The Crested honey buzzard (Pernis ptilorhynchus) is a bird of prey in the family Accipitridae which also includes many other diurnal raptors such as kites, eagles and harriers. This species is also known as the Oriental honey buzzard. Despite its name, this species is not related to Buteo buzzards, and is taxonomically closer to the kites. It appears long-necked with a small head (resembling that of a pigeon), and soars on flat wings. The male has a blue-grey head, while the female's head is brown. She is slightly larger and darker than the male. The male has a black tail with a white band, whilst the female resembles female honey-buzzard.